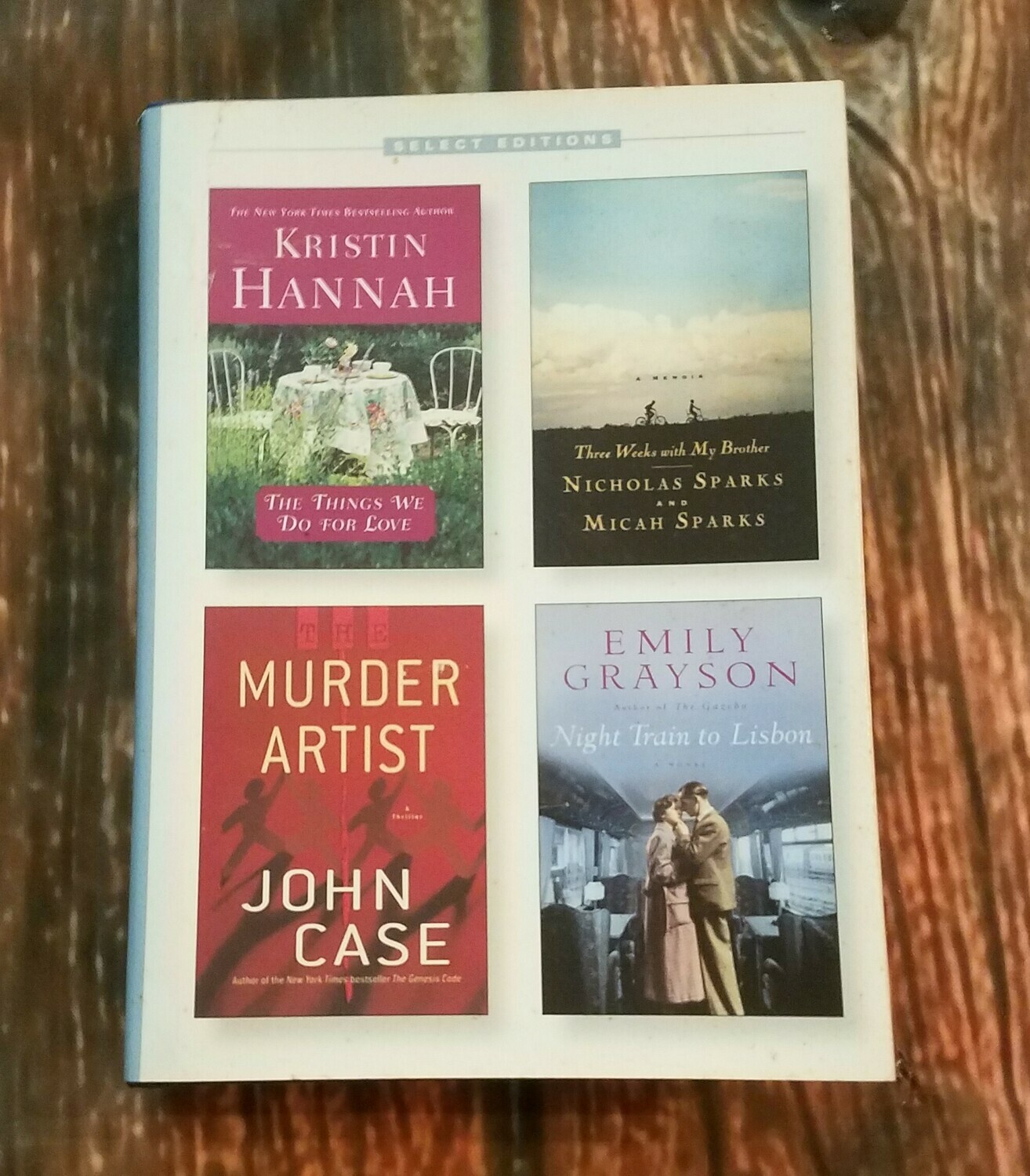 The Things We Do For Love, Three Weeks with My Brothers, Murder Artist, and Night Train to Lisbon by Reader's Digest

The Things We Do For Love:

Years of trying unsuccessfully to conceive a child have broken more than Angie DeSaria’s heart. Following a painful divorce, she moves back to her small Pacific Northwest hometown and takes over the management of her family’s restaurant. In West End, where life rises and falls like the tides, Angie’s fortunes will drastically change yet again when she meets and befriends a troubled young woman.

Angie hires Lauren Ribido because she sees something special in the seventeen-year-old. They quickly form a deep bond, and when Lauren is abandoned by her mother, Angie offers the girl a place to stay. But nothing could have prepared Angie for the far-reaching repercussions of this act of kindness. Together, these two women—one who longs for a child and the other who longs for a mother’s love—will be tested in ways that neither could have imagined.

Three Weeks with My Brothers:

The day the brochure came was a typical one. With a wife and five small children, a hectic schedule, and a new book due to his publishers, Nicholas Sparks was busy with his usual routine. The colorful mailer, however, described something very different: a tour to some of the most exotic places on Earth. Slowly, an idea took hold in Nicholas's mind and heart. In January 2003, Nicholas Sparks and his brother, Micah, set off on a three-week trip around the globe. It was to mark a milestone in their lives, for at thirty-seven and thirty-eight respectively, they were now the only surviving members of their family. And as they voyaged to the lost city of Machu Picchu high in the Andes. . . to mysterious Easter Island. . . to Ayers Rock in the Australian outback. . . and across the vast Indian subcontinent, the ultimate story of their lives would unfold. Against the backdrop of the wonders of the world and often overtaken by their feelings, daredevil Micah and the more serious, introspective Nicholas recalled their rambunctious childhood adventures and the tragedies that tested their faith. And in the process, they discovered startling truths about loss, love, and hope. Narrated with irrepressible humor and rare candor, and including personal photographs, Three Weeks with my Brother reminds us to embrace life with all its uncertainties. . . and most of all, to cherish the joyful times, both small and momentous, and the wonderful people who make them possible.

As a television news correspondent, Alex Callahan has covered famine, plague, and war. But what he's never known is the terror that grabs him when he ceases to be an observer of the dark side and becomes enmeshed in it. Alex is longing for some all-too-rare quality time with his six-year-old twin sons when they vanish amidst the hurly-burly of a country fair. Then the phone call comes, setting in motion a juggernaut of frenzy and agony.

Europe, 1936. On an overnight train to Lisbon, Carson Weatherell meets good-looking, wry young British scientist Alexander Alec Breve - a fateful encounter that sparks a passion as intense as it is instant. But Carson's joy is short-lived: an uncle in British intelligence reveals that her lover is a spy for Germany. Putting loyalty to country above the pain of her own heart, Carson agrees to spy on Alec.